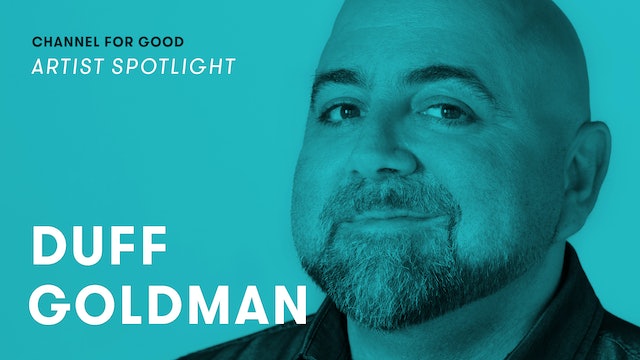 Duff Goldman is a chef and artist known for his dazzling, creative approach to food and his awesome stories describing the simple science of baking. Duff starred on the hit Food Network show Ace of Cakes, set in his bakery, Charm City Cakes. He now has cake studios in Baltimore and Los Angeles. You can watch Duff bake and decorate on Food Network’s Duff Takes the Cake and mentor bakers on Kids Baking Championship. Duff believes we can discover our inner creativity and celebrate with each other through the fun of baking!

Method:
1. Heat your oven to 300 degrees Fahrenheit. Put the whole chilis on a sheet tray and put them in the oven for 7 to 10 minutes to wake them up.
2. Once they’re done toasting, put them in a bowl and add hot water until they’re completely submerged.
3. After 10 minutes, pull the chilis out and drain them in a strainer. Using a knife, cut off the stems, slice them open, and scrape out the seeds — they’re bitter!
4. Using a blender or food processor, put the chilis, a little bit of the chopped onion, cumin, and a couple cups of beef stock in order to make it into a paste. If you want to add some heat to it, add a dash of chili oil.
5. In a medium saucepan, put 2 tablespoons of lard and heat it until melted. Add the chili paste you just blended into the pan. You’re going to cook it down a bit. Leave it on a low simmer for 10 minutes.
6. As that is cooking, in a large saucepan, add a few tablespoons of lard until melted. Add a portion of the chopped boneless chuck into the pan and sprinkle some salt and pepper over it. You’re going to cook it in batches as you don’t want to crowd the pan. Don’t be afraid to get some color on the meat either!
7. Once the meat is done cooking, in the same large saucepan, add the garlic and onion with a couple pinches of salt and pepper. Stir it continuously so the garlic doesn’t burn. You want to cook them until the garlic and onion is just browned on the edges.
8. In a large stockpot, add the garlic and onion. Add a few cups of stock in the large saucepan to deglaze it (gets the crispy bits off of it along with that flavor). Add the stock into the large stockpot. Add a couple more cups of stock, then whisk in the masa harina, so you don’t get any lumps.
9. Then add the chili paste to the pot. If it got a little dark on the edges, avoid using that part.
10. Finally, add the meat and the rest of the stock. Get it up to a boil, then turn down the heat and let this simmer for about two hours, stirring intermittently, about every 5 to 10 minutes.
11. Add half the brown sugar and taste it. If you like that flavor, then don’t add anymore, you don’t want it too sweet.
12. Then add the vinegar and stir. Taste it and see if you need more brown sugar, salt, or vinegar.
13. Top with chopped onion, cheese, lime wedges, sour cream, or anything that sounds good to you!