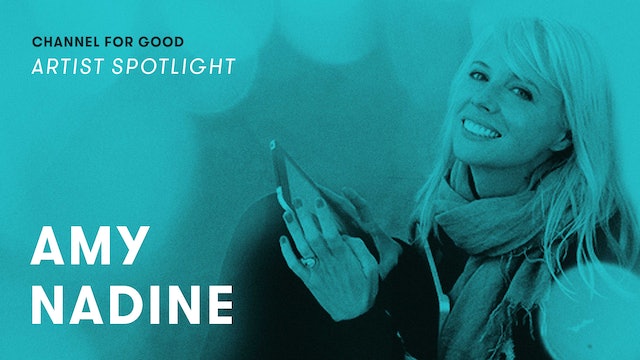 AMY NADINE
Amy Nadine hasn’t had your typical makeup career. Even though she always lived for makeup, she first got her Bachelor’s degree in Business and worked in Entertainment Public Relations before taking the leap into makeup. Since then, she has worked with Lauren Conrad, Rachel Bilson, Krysten Ritter, Emmy Rossum, Anna Paquin, Kate Bosworth, Susan Sarandon, Nina Dobrev, Brittany Snow and Mia Wasikowska, as well as Richard Gere, George Clooney, Hugh Jackman, Denzel Washington, Patrick Dempsey, Geoffrey Rush, Paul McCartney, Mel Gibson, Viggo Mortensen, among others. Her work has appeared on the covers and inside of Glamour, Harper’s Bazaar, Lucky, SELF, Women’s Health, Health, Nylon, Cosmopolitan, InStyle, Seventeen, Entertainment Weekly, Teen Vogue, and ELLE Italia, to name a few.

She has worked on movie posters such as Casino Royale 007, Spiderman 2 & 3, Made of Honor and Disney’s High School Musical. She has also worked on many national commercials, including Beatles Rockband, AT&T, Cadillac, Coors Light, Ferrero Rocher, Infiniti, Kohl’s, Nike, Southwest Airlines and Volkswagen. She rounds out her career with her work on many fashion campaigns, including the LC Lauren Conrad for Kohl’s, Charlotte Russe, Jerome C. Rousseau, Portmans, Skechers, Mary-Kate & Ashley for Wal-mart, Nation, Pegah, 3 Dots, Archive, Corey Lynn Calter, Paper Crown and AG Jeans.

Amy Nadine is known for her intuitive ability to define and accentuate the natural beauty of every face she touches. She prides herself in being an expert in her field, always studying color trends, cosmetics formulations… anything and everything make-up-related, and pinches herself daily that she’s made a career out of one of her greatest passions. She married her longtime French love in 2010 and they have two children, Jones and Iverson.

Summary of Amy's portfolio:
2009 - Developed two lip glosses for Mark Cosmetics after doing Lauren Conrad’s beauty campaigns for the brand.
2010 - Head of the make-up department for Life Happens!, an independent film starring Krysten Ritter, Kate Bosworth and Rachel Bilson.
2011 - Co-founded thebeautydepartment.com with Kristin Ess and Lauren Conrad, creating all of the makeup photo and video tutorials for the last three years.
2012 - Co-wrote the makeup chapters for Lauren Conrad Beauty.
2014 - Launched PracticallyPerfectBaby.com with her sister Whitney Fenlason, a parenting blog to help with baby’s first year.
2015 - Launched the Amy Nadine Renewing Nudes Eye Shadow Palette, her first product in her collaboration with Costco and Beauty’s Most Wanted. The highly-pigmented shadows are formulated with Bamboo Silk, Bilberry Seed Oil, Red Raspberry Seed and Clover Flower Extract to work with your skincare program instead of against it. Her other products included Amy Nadine Micellar Water, Amy Nadine Cleansing Oil and Amy Nadine Illuminating Baked Blush Duo.
2018 - Amy was named the Global Ambassador for ISH Cosmetics, owned by FabFitFun, and not only contributes with all new product development but has also made two appearances on QVC’s main channel representing the brand.